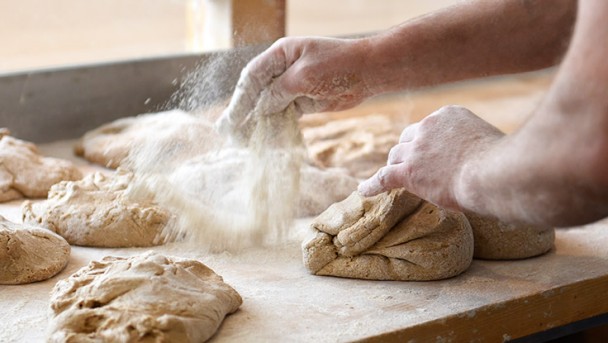 Florian Domberger shared the recipe for his Beute bread with us. Similar to French-style country bread, it's made of 90% wheat and 10% spelt flour. "Drizzle it with some olive oil", says Ralf Tschentscher, the head baker, "that's the best!" 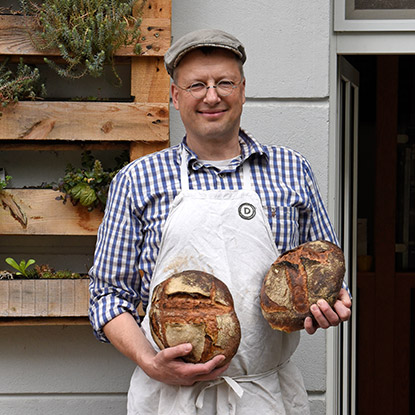 "A good knife is very important for cutting bread myself. Many customers ask me to slice their bread for them, but we don’t do that here because bread loses its freshness and aroma when sold ready-sliced." 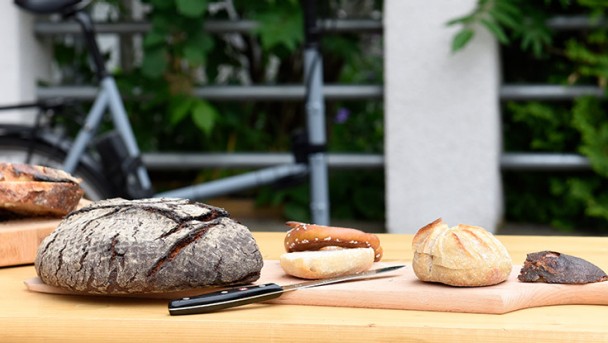 Florian Domberger, a Berlin baker, revives traditional bread baking by relying on only three basic ingredients: flour, water and salt. He is famous for his sourdough bread, which enjoys an excellent reputation in Berlin. Together with his wife and his team of bakers, they bake their fresh bread each day and have discovered a wonderful way to recreate delicious traditional breads. Meike got to enjoy a glimpse into the everyday life of a baker, as well as the experience of baking Beute bread together with Florian. This is made with 90% wheat and 10% spelt flour and is one of the bakery’s most popular breads.

The magical smell of fresh bread and sugary German butter cake mingles in the warm air at Domberger Brot Werk. It tempted my senses and appetite as soon as I opened the door - the reason why you should never visit a bakery with an empty stomach.

The shelves are filled with pretzels, buns, croissants, spice rolls, and fruity sheet cakes, a charming team of busy bakers kneads, folds, and shapes piles of spongy sourdough and creates a mesmerizing scene that puts the craft of baking in the spotlight. The open space is filled with flour dust dancing in the air, reflecting the early morning sun. All the different steps - preparing the dough, baking, and selling the baked goods – happen in the same welcoming room.

Florian Domberger and his wife Vanessa believe that good bread needs sourdough and the baker's dedication to reach utmost quality throughout the entire manufacturing process. Once you try their bread, you can only approve the couple's mantra. Even pretzels and croissants are so much tastier when they are made with sourdough. "My mother lives in Augsburg, in Bavaria - the home of pretzels – and she doesn't like the lye bathed baked goods from her hometown anymore since she tried ours" says the baker with a proud smile on his face. The globetrotting bread lovers settled in California, Hong Kong, Indonesia, Australia, and Switzerland before they moved to Berlin. Wherever they put their roots into the ground, they had bread sent over from Germany. "You can ask any German what they miss the most when they are abroad, the answer will most likely be: bread!". However, the vision to start his own bakery grew slowly in Florian's mind. He first learned the craft at Björn Wiese's traditional bakery in Eberswalde, about 30 miles north east of Berlin. The established baker taught him the basics, the foundation, but Florian wanted to stay open and experiment with the few ingredients that make good bread: flour, salt, water – and time.

"Bread is a staple that I can never have enough of, it always excites me!" To focus on sourdough was obvious for him, that's the kind of bread that Florian grew up with in the south of Germany. The passionate baker wasn't driven by tradition, he wanted to learn from it and then challenge it. His goal is to constantly approve the quality of his creations.

He feels strongly influenced by the bread movement in San Francisco and its leaders Chad Robertson and Elisabeth Prueitt at Tartine, by the rye bread in his hometown, Augsburg, but also by the dainty pastry culture of France. Everything that he sees, feels, tastes, and smells, everything that he learns in the bakeries of the world finds its way into the hands that make the bread at Domberger Brot Werk.

Domberger's crusty loaves of rye, spelt, and wheat bread lined beautifully on wooden shelves taste unbelievably good. They have depth, the inside is soft and airy like a sponge. You just want to spread thick slices with butter and sprinkle them with a little sea salt - anything else would be a distraction. "Good bread should never be filling, but satisfying", says the baker. I can only nod and agree while picking the last crumbs off the cutting board. Sourdough bread is alive, it needs the baker's constant attention. The dough never reacts the same, temperature, humidity, and altitude constantly influence the sensitive manufacturing process. Rising and baking depends on various circumstances and the baker's fine senses are the only guideline. If you want to be in control of the final result, you have to understand the character of the ingredients and how they react with each other and the surroundings.

Domberger Brot Werk only opened its doors in 2016. Their hand-crafted sourdough bread became a great success within just a few weeks. The locals love their neighborhood bakery and the fanbase grows steadily - also thanks to Florian's second "bakery". The Mobile Bakery is a 10-ton military bakery on wheels built in 1968, used by the Swiss army for their battalions. There are only 20 of them left and Florian was lucky to find one and bring it back to its former glory. He uses the huge, green truck to ake together with refugees and teach them his craft; or visits schools to bake with kids and introduce them to the mystery and value of homemade bread.

Florian shares the recipe for his Beute bread with us. Similar to French-style country bread, it's made of 90% wheat and 10% spelt flour. "Drizzle it with some olive oil", says Ralf Tschentscher, the head baker, "that's the best!" 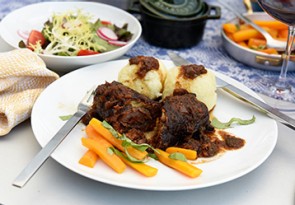 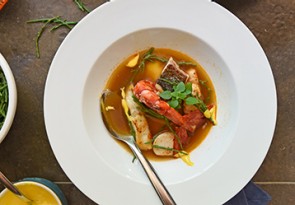 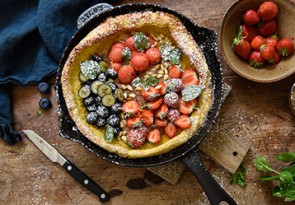 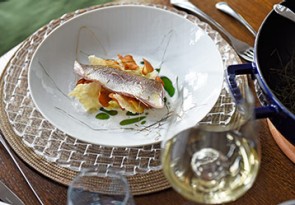 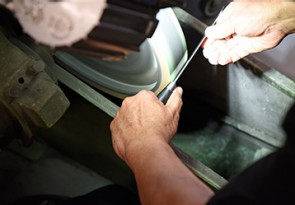 Germany - Recipe for a good knife

Find here all products to bring Culinary Tradition into your kitchen. 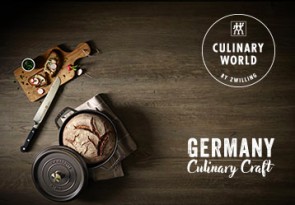